The Best and Worst Dressed of Golden Globes 2017

Oh goody, goody, it's that time of the year again - Awards season!
First let's do a little recap: the leftovers from last year's Met Gala made an appearance (all that silver and gold and belts and zippers... last year ladies, last year). It's still breasts galore and you can clearly tell who was a natural and who was a plastics miracle. We now know who works out and who has their cake first and Spanx later. We also can tell whose dresses were borrowed and who has enough style clout to have one made-to-measure (the hem is a dead giveaway: hitting the floor just perfect and the dress was made for the woman, pooling all over the ground as she teeters on sky-high platform stilettos and trips while walking up the steps... borrowed).
I'll start with The Worst. 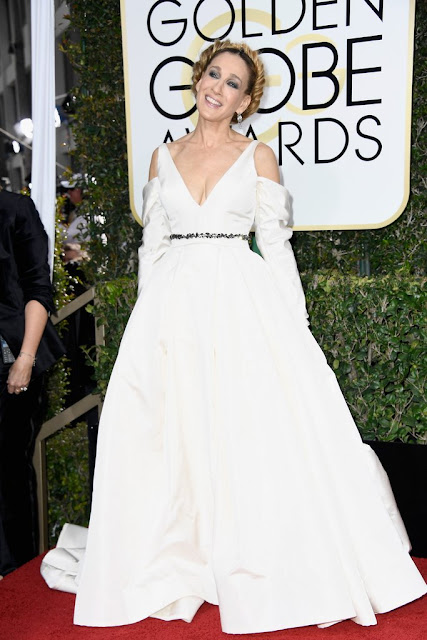 SJP in Vera Wang. I don't even know where to start! Some said it's bridal, or an homage to Princess Leia with the braid and the white and the sleeves (which you really want to just rip off!), I call it a one hot mess. She would've been a lot better off with a bird on her head, at least we'd get that.
(P.S. the same sleeve fiasco appeared on another Vera Wang gown worn by Heilee Steinfeld. I think it's time for Vera to hand over the reins to someone else.)