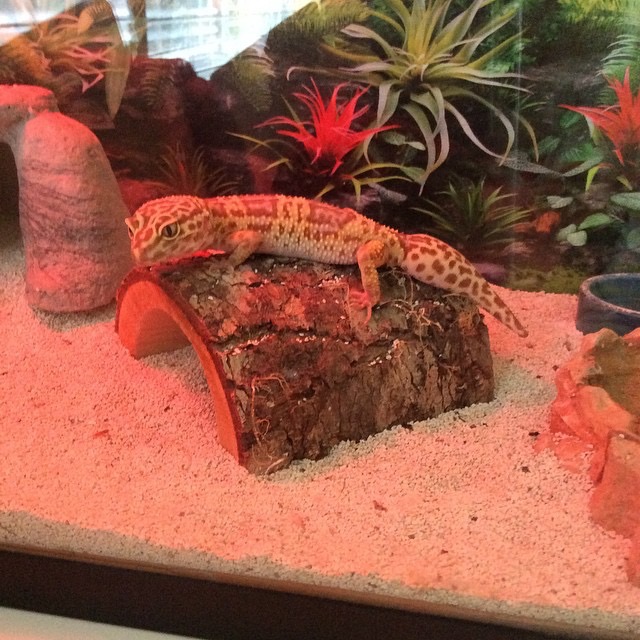 We have a leopard gecko. She’s adopted. When we adopted her, we all thought it was a he. No, this was not a Bruce Jenner scenario, it's just hard to figure out sex in lizards. But once we discovered that it was indeed a girl, a lot of things were easily explained. Like her throwing a fit when we dared to leave for a weekend trip to Las Vegas (mind you she had a sitter and did not go hungry). When we returned she showed us what she thought about our trip by refusing to eat, overturning her cement pool and spilling the water all over. I bought her a new condo, twice the size, a new carpet in desert sand, and took her to a vet for a visit in a special lizard suitcase wrapped in a blanket. I even changed her diet from crickets (that chirped at night) to fat wax worms that I now had to keep in the fridge. All because she refused to hunt for her dinner. And I hate worms. She finally decided that I somewhat redeemed myself and started to get fat on worms. Her name is Felipa, by the way. It was Felipe, but we had to make it female. At least it was an easy change.

She no longer hunts, too lazy. She eats her worms of little metal tweezers. Revlon tweezers actually. Used to be mine, but I gave them up for lizard cause. I have to wiggle the worm in front of her nose, then she eats it. Five worms, every other day. She doesn’t have a good aim, sometimes she missed and does not grab the worm correctly and it falls onto the carpet. She always steps on it and walks away. Does she not feel that there is something squishy under her foot? And very delicious? I have to pick up the worm, with my tiny Revlon tweezers, and attempt to feed her again. Usually an easy task. And usually she cooperates and lifts her paw up.


Sometimes we let her out for walks around the house. We call it ‘carpet time’. But every time she’s out, she attempts to bolt toward the door (little fat gecko on tiny thin legs sashaying toward the door at maximum speed with tail waving from side to side - quite the site!). So we stopped giving her carpet time because I really don’t want to be hunting her down under the couch. And yes, you can’t touch the tail: she’ll drop it. I take her out in the evenings once in a while and let her climb on top of me and just hang on my shirt. Her tiny claws like like needles, super sharp and pointy. And they hurt when she digs in for support. But I let he hang on because I am just so nice.

The niceness ended last night. Danny and I went to feed her as usual. When I came over to her tank, Felipa got visibly excited when she saw the worm container. I fished one out, with the tweezers, and presented it to her right in front her nose. She lunged, missed, and dropped the worm. And of course it was under her. As I tried to pick it up, she suddenly jumped and bit my index finger. Now, I know that the worm and me are the same color, but come on! Don’t bite the hand that feeds you! Let me tell you: those little gecko jaws are like a vise. She was worse than a bulldog, she bit and held on while I was screaming and trying to shake her off. She finally flew off and landed on all fours.

I store every known wood disinfectant available, and I dumped all of them on my finger. My concern was whether or not I would need a some kind of a nasty shot, since it was exotic animal bite. But Terry Googled it and since she's a house lizard and extremely healthy, I do not. While I was piecing myself back together, Danny told Felipa that she was a bad lizard for biting Mommy. Her response: “worm!”

I will now have a permanent reminder of her smile on my finger. Her carpet privileges have been revoked. And from now on, the worms will be dropped down from a safe distance and she will have to go and find them.

Dogs have to be much easier...