There once was a Wire (14-3 Romex) whose one half lived in the kitchen ceiling and the other in the wall. At first, the Wire was happy – it was going to be a ceiling wire, nice and warm with no temperature changes and no critters with sharp teeth. But that happiness was short lived because the clumsy installer pinched it by hammering the clamps too hard into the stud. The Wire got a little mad.

For a while, the Wire was powering an ugly overhead fluorescent light fixture, which soon got replaced by a somewhat improved fluorescent light fixture (this one had brushed steel frame around it and looked like a flying saucer). Then the house changed hands, and the new hip owners replaced the flying saucer with a track with tiny lights and glass pendants. What they didn't know was that the poor Wire was pinched and had to work extra hard to supply the power to all the new lights. The track was the main light source in the kitchen and it was on every night for hours on end. The Wire was now getting really mad – it was working way too hard.

Years went by, and the Wire was getting madder and madder. And then one day, the Wire decided that it had enough and shorted. But the Circuit Breaker downstairs said "Oh no you don't!" and tripped. It happened right before dinner on a Monday night. Suddenly there was no light in the kitchen, the adjacent hallway and the small newly refreshed powder room. The   Neck of the House sent The Head of the House down to the basement to investigate. But the little Circuit Breaker only sparked back in response and refused to switch back on.

Luckily, in the house the door lives a nice man who's an Electrician. So, after dinner, he popped over with a very fancy screwdriver and a strange electrical gadget that looked like a lobster and beeped when there was a problem. The suspicion was that either the Breaker needed to be replaced or the newly installed light fixture in the powder room (installed with care by The Neck of the House). Oh how The Head of the House wanted this to be the light fixture, because for once this "little" problem would not be his fault. But, not only was the light not the cause of the problem, it got an A+ for installation from the Electrician. The problem continued and everyone was stumped. And the Wire in the ceiling snickered in satisfaction – it was not discovered yet.

Two and a half hours later, with every outlet and switch pulled out of the wall and horrible prospect of opening up the drywall looming over their heads, the people turned their attention to the ceiling lights. Piece by piece, the track was carefully taken apart in hopes that it would be reinstalled later but now with new LED lights. Every part was examined but they found nothing wrong. Finally they got to the electrical box. Bingo! The lobster apparatus beeped like crazy, the Wire was finally discovered. It was traced to a switch in the wall and promptly cut out of the circulation. The Circuit Breaker said thank you and turned back on. The Head and The Neck stared at the ceiling in horror, how do you replace a wire that has been drywalled over without damaging the ceiling? The Electrician gave two options:
A: Best Case Scenario – he's able to pull through the new wire by tying it to the old one. Ceiling stays intact.
B: Worst Case Scenario – the wire is tacked to the struts, and it will not budge. "At that point, might as well think of a new lighting plan, since we'll be making a mess anyway."
You can just guess what happened.

The Neck of the House discovered a whole new shopping experience in the electrical isles of Home Depot and Lowes. She spent so much time there that she now corrects the sales people when they try to sell her the wrong stuff, memorized the entire line of Lutron products, and can tell a difference between single pull or a 3-way switch just by looking at the screws. The Head of the House just asked for everything to be put on dimmers and stayed out of The Neck's way. But it was the Wire still had the final say.

The entire first floor wrapped in plastic  in order to avoid cleaning up drywall dust for months to come (referenced to Dexter being made), the work started on a cloudy Sunday morning. 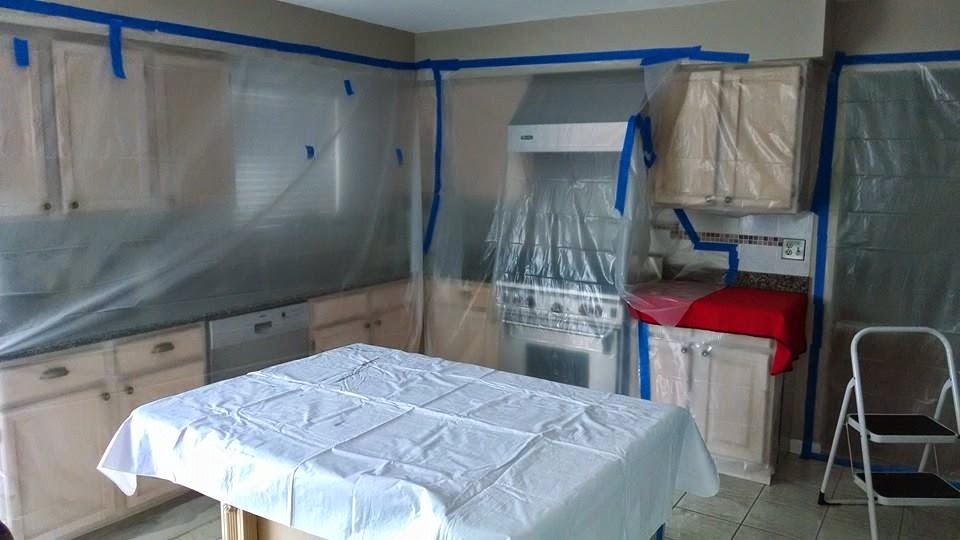 First, there was a very careful removal of a small section of drywall in hopes of locating the Wire and replacing it quickly and cleanly. But of course, as always in construction, one never knows what one will find behind the drywall. The carefully cut small opening turned into a giant hole with part of the soffit how missing as well. The Wire cried out "revenge is mine!" and hid under the ductwork. But the Electrician finally won, announcing that the hard part was over. Or was it?
Torture tools appeared to make even more holes. Runs to Home Depot for fresh drill bits and more Romex were made wearing nothing but dust covered tees as it started to rain and the temperatures suddenly plunged.
Fine white dust covered everything and The Neck started following the Electrician with a vacuum. About five hours later, the dust part ended and finally installation began. They gave up, tired and filthy right at dinner time. But the ceiling finally had light, even if it was from temporary bulbs. And they dimmed! The Wire was now dumped into the garbage, next to something smelly.

There still drywall missing from the ceiling, but The Head of the House finally convinced The Neck of the House that perhaps hiring someone to mud and paint might be a lot better than DIYing it. She reluctantly agreed... And went back to shopping for can trims and pendants.
to be continued...